This year’s Rendezvous was incredible!  We had over two dozen attendees, some old friends, some new faces, lots of shooting, and plenty to do.  Plus we sold out all 300 of this year’s raffle tickets benefiting Soldier’s Angels Valour IT project.  If you weren't there.  You really missed out!

The trip started off at O’Hare as usual.  In my checked luggage I had 4 firearms shoehorned into a fairly small case.  This year’s kit included my Ruger 22/45 (MkIII) for steel shooting, a Ruger Super Blackhawk playing the body double for the Blackhawk True Blue Sam donated to the raffle this year, a Walther PP in .32 acp (because I could shoot it without burning up harder to find calibers) and the Stevens “Little Scout 14-1/2” I donated to the raffle.  Luckily the Stevens is a takedown so it fit crosswise into the suitcase (lockable hard sided camera case) 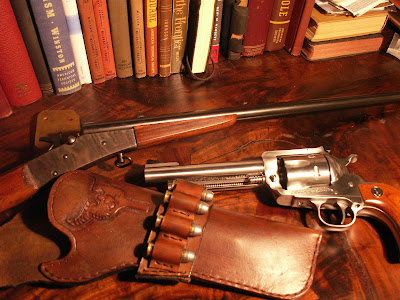 With all of the shooting irons packed, I was still able to fit in ammo to feed them all including some precious mini-mags and game-shok 22 for the little Ruger.  That didn't leave a whole lot of .22LR at home, but I figured I’d rather use it up on this trip than resort to throwing pebbles at steel plates.

So with everything locked up securely I handed off my bag to the TSA and spent the next several hours listening to various airport security warnings  and sitting in flying Aluminum tubes.  That gave me plenty of time to ponder topics like “If it’s such a special announcement, why is it pre-recorded and playing on a 15 minute loop?”  Or, “Where do the bag handlers learn how to drop bags from 6” and make them hit with the same force as a 6’ drop?”

I dragged into the Silver Legacy at nearly 2AM so I checked in and hit the sack right away.  Luckily the time difference didn't let me sleep  more than a few hours before I was ready to get up again.  A quick meet & greet with the other early arrivals, a run through the buffet line and we were off to Cabela's.
The folks here have been quite good to us in years past and this year was no exception.  This year they received and held practically all of our door and raffle prize swag for us, which they had waiting for us as we walked in.  Then they proceeded to give us coupons and offer us tours through the gun library.  While everyone was drooling over the ‘if I won the lottery’ cases I did a little ammo scouting.
Me:  “Hey Kevin, didn’t you say you hadn’t seen any 22LR in the wild for 6 months now?”
-rattle-rattle-rattle-rattle-
Kevin: “Mini Mags!!!  WHERE?!” 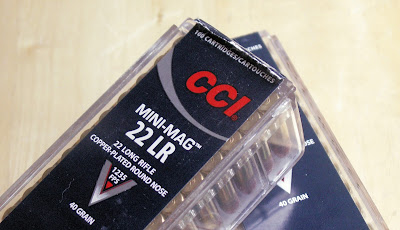 We all managed to score a 100rd case of mini-mags for pretty much the same price I would have expected before the shortage.  From what I could tell, they were putting out a fixed amount each day and not replenishing until the next.  The system seems to work pretty well.   They had more out a couple mornings later when I made a quick detour before going to the range.
Their gun counter was pretty well stocked too.  The last time I was in a Cabela's the shelves were almost devoid of firearms with the possible exception of a couple used shotguns, a Taurus Judge and a purple gripped LCP (really Ruger…why?) This time I didn't see any empty slots in the display cabinets.
After a little perusing the shelves we all ponied up for the ammo and loaded up once more for a trip to the Roop County Range at Fernley

Now last year we came out here on a Sunday and were treated to a little exposition shooting by the Roop County Cowboy Shooters. 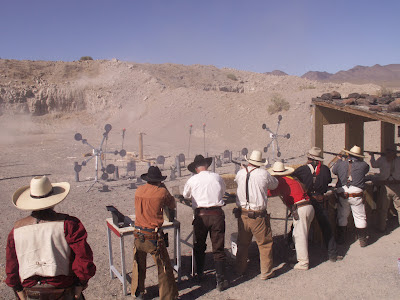 That picture was actually taken after the last of their matches, but they were nice enough to stick around for us.  This year we arrived while their matches were in full swing expecting to watch some shooting, chat with a few cowboys and cowgirls then go home.

We watched a few people shoot then something wonderful happened.  People started putting down guns and ammo at the loading table and saying “What would you like to shoot?”
Apparently we looked a bit hesitant because folks started coming over and saying things like “Around here, if someone offers you free ammo, you say yes!”
Fair enough!  We all started taking turns at the firing line whenever there was an opening between the paying shooters. 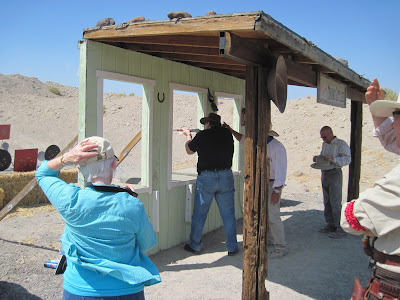 We even had a chance to shoot some beautiful rolling blocks at a 4oo yard target! 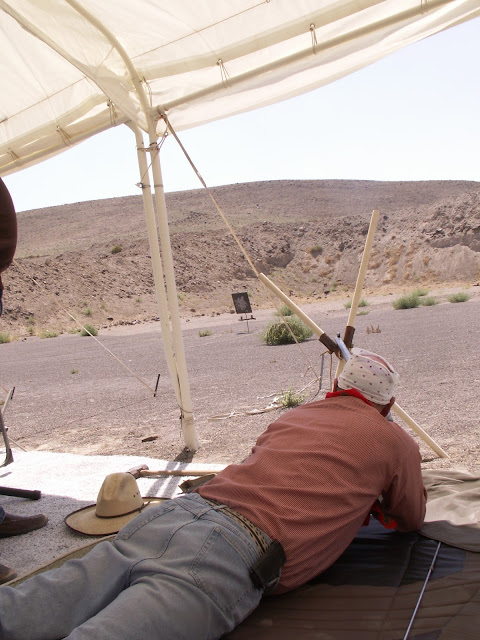 Now for those who aren’t familiar with Cowboy Action Shooting, I’ll backtrack just a bit.

CAS is a sport supported by the Single Action Shooting Society and is one of biggest (if not the biggest) shooting sports out there.  Basically it’s speed shooting for pre 1900 type firearms meets wild west cosplay.  Most CAS clubs set up western themed range facilities where competitors can shoot stages through bank windows, over saloon doors,  from gallows platforms, out of stage coaches, or even from faux horses.  Competitors are also expected to dress in period attire and adopt cowboy handles to further enhance the experience 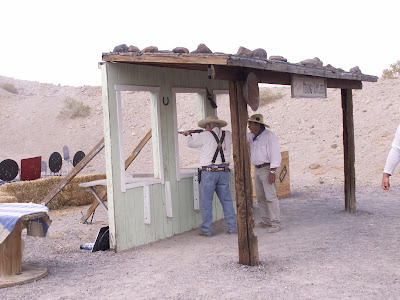 Getting started does require a fair bit of equipment.  Your basic kit includes two six shooters, a lever action rifle, a shotgun, some serviceable gunleathers, a costume, a cart to haul around all of your loot, a toolkit for emergency repairs, a cleaning kit, and usually some reloading equipment to reduce the cost of all of the ammo you burn through.  The initial cost may be a bit of an obstacle, but CA shooters are notoriously easy going usually willing to lend a hand (or even a gun) to a new shooter. 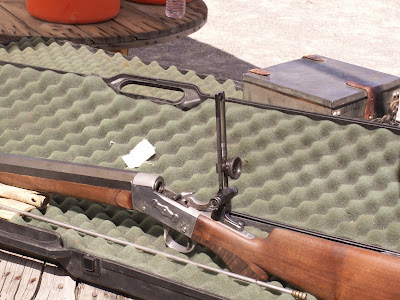 There are usually side matches as well, some SASS sanctioned and some club specific.  These typically use firearms other than those used in normal competition.  Some matches are designed for percussion/muzzle loading firearms, some for derringers and pocket pistols, others are for long distance rifles.  There’s a place for pretty much any pre-1900 (or in some cases early 1900s) firearm you like.
And if you just want to do some shooting for the sake of shooting, you can use a break in the competition to shoot stages wither pretty much any firearm you like. 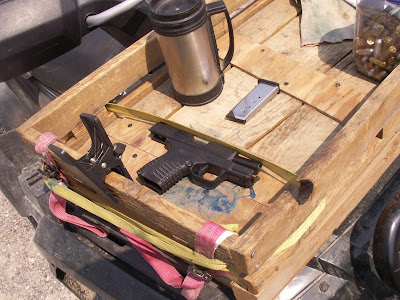 The Roop County Cowboy Shooters club has some really great people in it.  Once we used up a little of their ammo they invited us down to their pavilion to rest up and chat a bit.
“Care for some water?”  “Here, have some cookies.”  “Help yourself to an air rifle.”  Yes, they had an air rifle range set up next to the lunch area so people could unwind from shooting by doing a little target practice.  Nice eh?  Hopefully next year we can get together again!


After that it was back to the hotel for a quick nap before we metup with the GunAuction.com crew for supper.  More on that next time.
at 12:44 PM 3 comments:

How cool are your weekend plans? 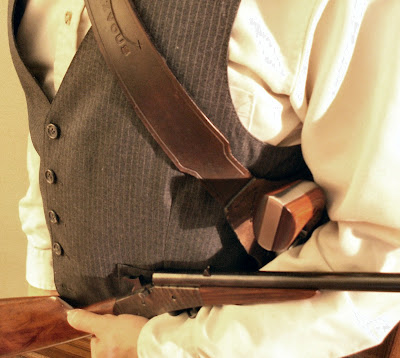 If they aren't at least this cool, you should go to Reno! 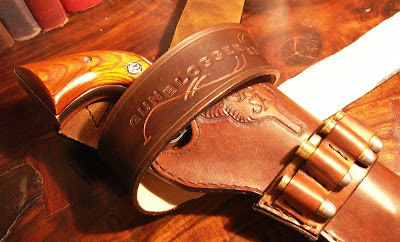 Win a RUGER   Blackhawk with a hand-made holster. 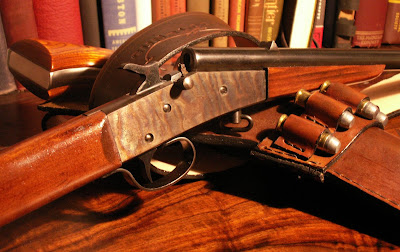 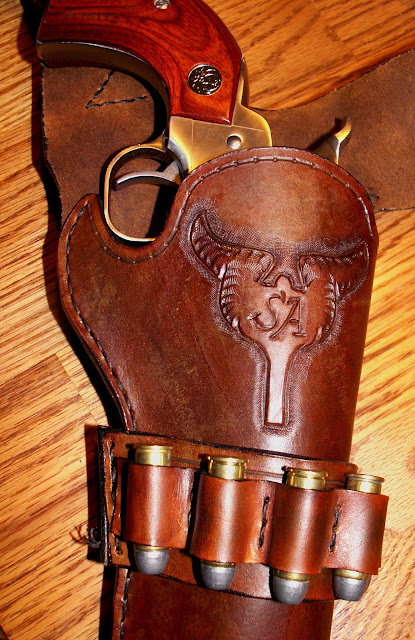