Well ladies and gentlemen, I am once again off on a grand adventure. Unlike the last time I'm going to be out with plenty of co-workers, which is good because they're great people and because the weight of this trial (and it is a big one) does not fall on me alone.

The last trial I went (by myself) never really got off the ground. It was sort of a last minute affair given to me on a Thursday morning. By Thursday afternoon I was on a plane out of O'Hare. Then of course I had an hour and a half (or longer, I don't remember) drive to the plant location where I checked into a hotel for the night. The next day I went to the plant where the parts I needed for the trial were supposed to be arriving by UPS next day air.

Remember Murphy's Law? The parts didn't show up. So I got the tracking number and started calling UPS. The parts were stuck several hundred miles away in a terminal. Or so we thought. The frustrating part was that calling UPS did almost no good. The automated system will only tell you that the package is "in transit" and the operator could only tell me that the package had made it to Louisville Kentucky. There was no information on whether it was still in that location or shipped out or even in one piece.

So after several hours of not getting anywhere, there was little choice but to call it quits, load up the rental car, and make the trip back to the airport where I flew back to the busiest airport in the world, got in my car and drove home through rush hour traffic.

It wouldn't have been so bad if I could have reported a success but thanks to UPS that wasn't possible. Moral of the story, don't trust UPS (and several other companies) when they say "next day."

Here's hoping this trial goes better.
at 5:44 AM No comments:

In an email from Dave today...

"Thank you for your interest in the Direct Loan Program"

Apparently I'm not the only one who recognizes an unintended pun when I see it.
at 9:06 PM No comments:

Maybe I'm the last one to hear about this, but has anyone noticed the googol search SMS feature? There have always been times when I've wanted to run a search but not had a computer around. Having the ability to run a search using my cell phone and then get the answer within a few minutes sounds pretty cool.
Has anyone out there tried this service yet?
at 8:55 PM 3 comments:

On the Road Again

Well folks, it's hard to believe but after being on the road for 10 days, and home for 6, I'm back on the road agian

I'm thankful that I'm only gone for a day and a half this time, still it's kind of cool to be jetting around like this. Of course the really nice part is that I'm doing this trip (and small project) completly unsupervised. It looks like it's time for the rookie to show that he can actually do his job.

The mystic chose the thermos bottle.
"Why a thermos bottle?" the others asked.
"Because the thermos keeps hot liquids hot in winter and cold liquids cold in summer."
"Yes -- so what?"
"Think about it." said the mystic reverently. That little bottle -- how does it know?" 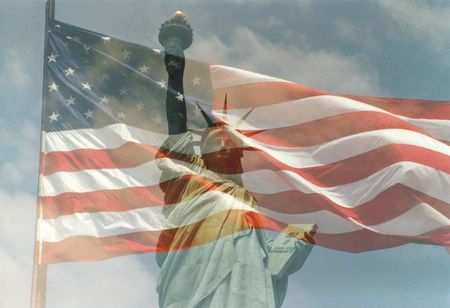 On this day in 1777, the Continental Congress adopted the stars and stripes as our official national flag. Please take a moment today to gaze at a flag and ponder what is symbolizes.
at 11:15 PM 2 comments:

Since most of you reading this are friends of mine in the real world I just thought I should make a little announcement. My friend Jess and her family are having some dark times. It's not my place to say exactly what's wrong, but if you could please drop her a line or give her a call and send a little love her way. I'm sure she'll appreciate it.
at 6:50 PM No comments:

After two weeks on the road I have now returned home (my apartment in Chicagoland). At first I didn't think this apartment would feel like much of a home (let's face it when you've got a parking lot outside your door it usually feels more like a hotel) but after a couple weeks in a hotel in Minnesota this place really does feel like home.

Of course it does help that I now have a few finishing touches. You know, simple things that a college student might never think of on his own like bookcases that aren't made from milk crates, tables that don't double as cardboard boxes and pictures on the wall that aren't cut out of magazines. Right now I'm typing in the middle of a comfortably furnished living room with a 27" TV (with stereo sound) a couple of stylish bookshelves, an oak table, 4 bentwood chairs, an antique lamp, and a leather recliner. A few months ago this would have unimaginable luxury but now it feels almost normal, and it sure does feel good coming home to it!

The other piece of good news is that despite working way too many hours last week and being grumpy half the time from lack of sleep, I found out that I have some pretty incredible co-workers. I'm serious about that too, I'm not just worried that they might be reading this (not that many people do) I really think they're great. When you can work 15 hours with someone, then spend 2 hours in a lousy hotel bar comparing your life stories and still like someone, chances are you're dealing with potential friend material. . . Especially if you do that multiple days in a row.

Oh, and I took off from work a few minutes earlier than usual today so I could get to the bank and cash my first paycheck. Now if you'll pardon me, I think I'll go sit in one of my cushy chairs and enjoy a delightful beverage while I watch the sun go down and listen to Joe Venuti on the stereo.
at 5:50 PM No comments:

I'm traveling this week (and next) so I thought this would be good material for the friday funny.

Three lawyers and three engineers are traveling by train to a conference. At the station, the three lawyers each buy tickets and watch as the three engineers buy only a single ticket. "How are three people going to travel on only one ticket?" asked one of the three lawyer. "Watch and you'll see," answers one of the engineers. They all board the train. The lawyers take their respective seats but all three engineers cram into a restroom and close the door behind them. Shortly after the train as departed, the conductor comes around collecting tickets. He knocks on the restroom door and says, "Ticket, please." The door opens just a crack and a single arm emerges with a ticket in hand. The conductor takes it and moves on. The lawyers saw this and agreed it was quite a clever idea. So after the conference, the lawyers decide to copy the engineers on the return trip and save some money. When they get to the station, they buy a single ticket for the return trip. To their astonishment, the engineers don't buy a ticket at all. "How are you going to travel without a ticket," asks one perplexed lawyer. "Watch and you'll see," says one of the engineers. When they board the train the three lawyers cram into a restroom and the three engineers cram into another one nearby. The train departs. Shortly afterward, one of the engineers leaves his restroom and walks over to the restroom where the lawyers are hiding. He knocks on the door and says, "Ticket, please."
at 12:02 AM 2 comments:

This has been a REALLY busy week!
Over the weekend I entertained my parents (who decided to visit for Memorial Day weekend) We ended up getting furniture and various decorations for the apartment. It's still got no real bachelor pad potential, but at least it's furnished and comfortable.

Of course now that it's beginning to look a bit more like a home, I immediatly take off and for the airport and head out on a trip for my job. I'm traveling in the land of 10,000 lakes! Actually, now that I'm here there's very little traveling. I'm spending most of my time at work. In fact I've got to start working at 6AM tomorrow so I'm up way too late typing this.

So far this week, I've gone to work, hung out with my co-workers, and then come back to my hotel room and collapsed. And yet it's wonderfully satisfying to know you've accomplished something and then go enjoy a drink with your co-workers.

To fulfill a dream, to be allowed to sweat over lonely labor, to be given the chance to create, is the meat and potatoes of life. The money is the gravy. As everyone else, I love to dunk my crust in it. But alone, it is not a diet designed to keep body and soul together.
Bette Davis

Work begins at 6 tomorrow, so it looks like an extra serving of "meat and potatoes" tomorrow.
at 11:37 PM No comments: