Saturday in the park 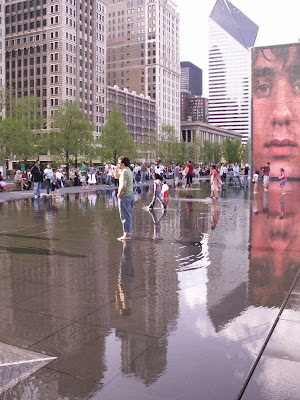 I was sitting in () earlier waiting for my flight home and I decided it was finally time to recap where I had been on this trip. Even these past two weeks it has been quite difficult to get away from the factory for any non-work related activities, so I really don’t have anything new to report since leaving . I suppose that’s just as well though. I’ll need to spend plenty of time in and in the near future.

It’s been quite an eventful trip, but mostly because of work related matters. I only had a few chances to go out and sightsee, and that was all in . Still, it was quite nice and I did enjoy it quite a bit.

In , the crew was working a cycle of 4, 12 hour days then 3, 8 hour days. I had a couple days off during the month and did use that opportunity to go see the Suikerbosrand nature reserve, which was very close to where I was working.

The Suikerbosrand is a nice quiet place, often favored by hikers both for day or week long trips. If you don’t have the time or the gear for a proper hike, you can always take the tourist loop driving trail around the reserve. The reserve contains most of the mountain range of the same name (which in turn is named for a type of shrub found in the area.) The mountain range doesn’t exactly measure up to the Rockies, or even the , but if you consider that most of the region is a mile high to begin with then the peaks are pretty high up. And the views are certainly impressive. 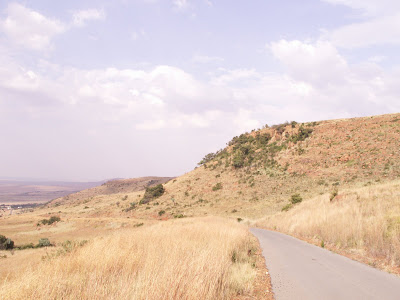 The whole region is highveld grassland, meaning that it’s a very arid, somewhat prairie like environment with few trees and plenty of grass fires (which are often allowed to run unchecked if they do not threaten an inhabited area. Combine that with the red soil, and it looks like with tall grass.

This particular region has basalt (igneous) inclusions into a sandstone (sedimentary) layer. Consequently, over the years, the softer sedimentary rock has eroded away, leaving rather prominent peaks and ridges made of basalt and a thin layer of soil. 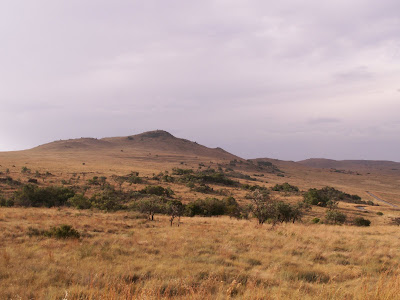 The higher regions of the reserve have relatively limited wildlife activity, because they are so dry and sparsely vegetated that there is little cover and less food for herds. Of course if you get close to a watering hole, then you usually see quite a bit of wildlife. 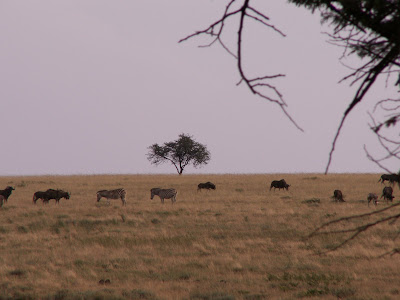 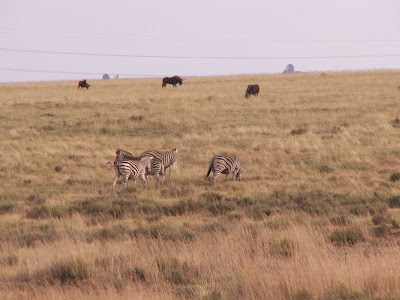 In this reserve is mostly populated with eland, wildebeest, and zebras. Occasionally you will see some Hyenas, but you don’t encounter large animals like elephants and rhinos or predators like lions. Of course this lack of the most dangerous African animals probably explains why there are so many hiking trails in the area. 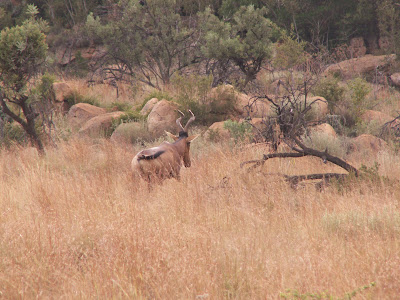 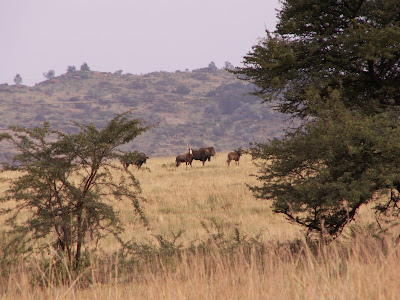 I did get to see one predator while I was in though. One of the local wildlife officers stopped by the factory to show some friends a ‘little’ tiger cub. 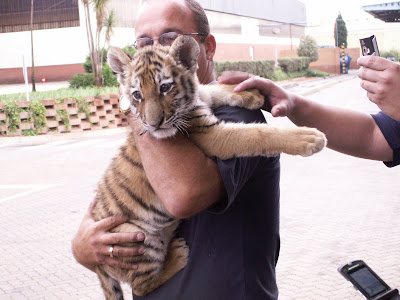 It played just like an ordinary house cat, but I would really hate to get it mad even at a fairly small size like this. 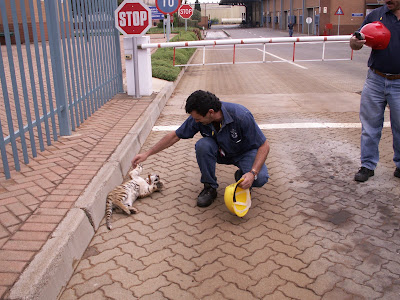 I did get one extra treat on this trip, thanks to a colleague at work. was using steam locomotives in regular operation as recently as the early 1990s. Occasionally you might find one in use, but the only time they are really seen now is when they are being run for railfan excursions. Luckily for me the railyard for Rovos Rail, a company that specializes in running regularly scheduled steam excursion trains, is just North of Johannesburg.

This coworker and I took a few hours on an afternoon when work ended early to go see the railyard and the railway station. The station was quite an incredible piece of work. It was registered as a historical landmark for many years, but was recently burned down (arson, I’m sure) and had to be completely rebuilt. The rebuilt version is quite beautiful, and since it had an old steam locomotive on the platform we stopped in to look at it and take a couple of pictures

We talked our way onto the platform and I was about to snap a photo, when a Metrorail official on a power trip stopped us and said that we were not allowed to take pictures of the locomotive without first getting permission from the marketing department. His line of ‘reasoning’ was based on the idea that images of the engine could be used in a negative manner and hurt the tourist trade as well as their standing with local customers. Never mind the fact that the marketing department was closed that day and that the locomotive had been built decades before any current railroad employees were even born. So rather than having a cheerfull comment and a photo of a steam engine, I now have a story about how an official of Metrorail was simultaneously uncooperative, illogical, and rather rude.

Thankfully, the day did not end there. The people at Rovos rail know how to promote tourism so when I stopped by the yard I got to take pictures of their locomotives from the inside and out. After a nice chat with Mr. Rohan Vos (the head of the company) we were free to roam around the yards so long as we didn’t go into the engine shed and distract the men working there. So I managed to snap a few nice shots before being chased inside by a thunderstorm. 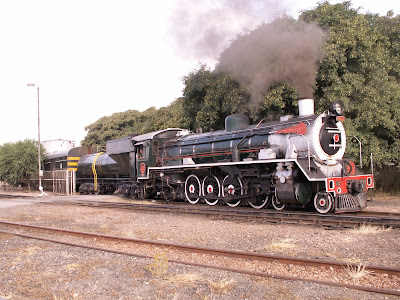 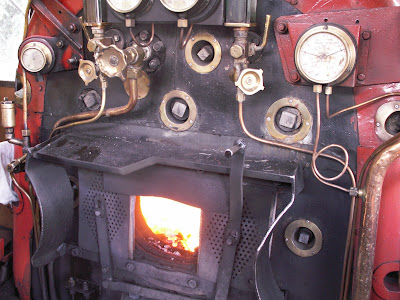 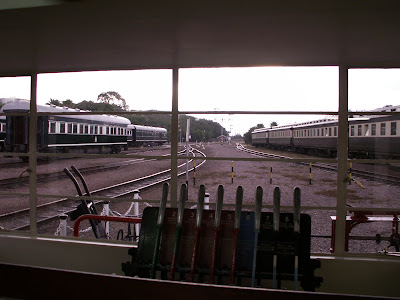 A fun as it might be playing with tiger cubs and running around nature reserves with a camera, I have finished (for the time being) my work overseas, and now I am back in . The weather is much nicer than it was when I left. (It’s not sunny, but it’s not bad.) Of course it has been a while since I was here. The last time I saw the skyline, there was still quite a bit of ice and snow on the ground.

It should be nice to be back in town for a while. Of course, it is a bit of a switch considering some of the places I have been lately. 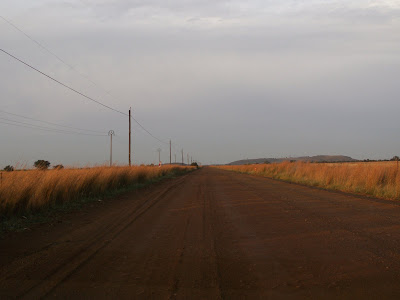 No, I have not been eaten by lions, trampled by elephants, or swallowed by a crocodile. (I was however, laughed at by hyenas.)

I've just spent a month in a place where checking my email usually involved checking for a dial tone. I have now left South Africa for Singapore where I will be spending a few days before continuing on my way.

The trip so far has actually been rather nice, though far from relaxing. South Africa was rather enjoyable, though I won't go into the details just yet.

I have some photos to share and will post them in a couple of days when I get a little time away from the factory. I the meantime, I will leave you with this. 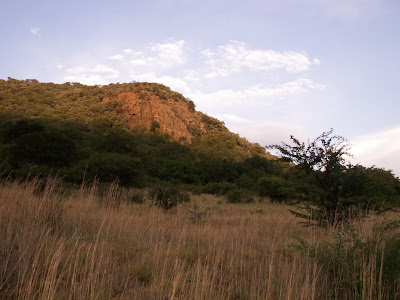