This may not seem like the time of year when you need to worry much about cooling, but most of us have at least one cooling system that needs to be running well year-round. 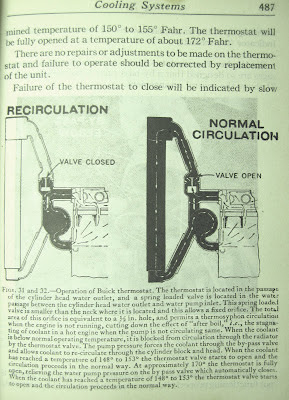 Yep, the coolant in your car is still working just as hard in spite of the mild weather.

Last fall I had a bit of a scare with my Ford. For a few months I had noticed a gradual loss of coolant, and like anyone who knows a bit about cars I started dreading the possibility of a dead water pump. So I crawled under the Exploder and took a peak. No seepage from the water pump. What a relief! At least I wouldn't have to worry about replacing that, but where was the leak? I had replaced a failing radiator hose clamp so I knew the problem wasn't there. The hoses were still quite pliable and not showing any cracks. Still there was a leak 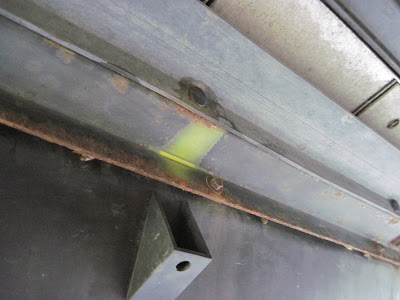 So I did some googling. Apparently the fittings for the ATF heat exchanger (mounted in the side tank of the radiator) have a reputation for leaking ATF into the radiator (overheating your engine) or leaking coolant into the ATF (ensuring a burnt out transmission in very short order.) So I checked the coolant for discoloration and the transmission fluid for signs of moisture. Nada! This was getting frustrating
Then one day after work I left the car in the drive for a few minutes, intending to run errands before it got too late.
I came back to this. 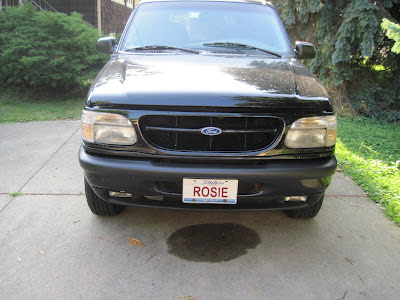 Well if I can't spot it now I must be blind, so I got the flashlight and mirror and started looking around. Sure enough I found the leak, but it wasn't where I would have expected 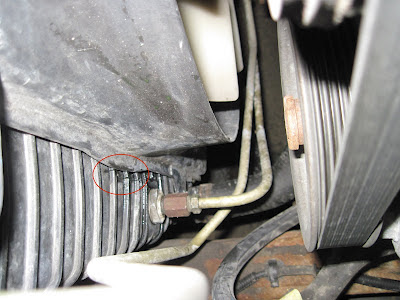 That's the side tank of the radiator, and that's a crack which must have been slowly expanding for months.
The side tanks are made of a high density plastic, which is actually quite rugged and probably more cost effective to make than brass or aluminum tanks. The problem is, that when it finally fails, there's no bringing it back, you have to replace the whole thing. Luckily for me I live in the information age and one google search and two phone calls later I had tracked down a brand new radiator at an Auto parts store that was still open. I drove very carefully there and back, trying to avoid hitting any bumps for fear that I would suddenly see a cloud of sickly sweet steam billow up from the hood.

I made it back just fine though, and with a little help from these guys I managed to install and burp the new radiator by the wee hours of the morning.

If I did it again I could probably have gone fast enough to finish the job and still get a good night's sleep.

So how would this scenario have gone in an older vehicle? Well has anyone else noticed how few radiator shops are out there? There used to be little shops all over the place that specialized in brazing and when you had a coolant leak you could go to them to have your radiator pressure tested, then when they identified a leak they would get out the torch patch it up so your radiator was water tight again. 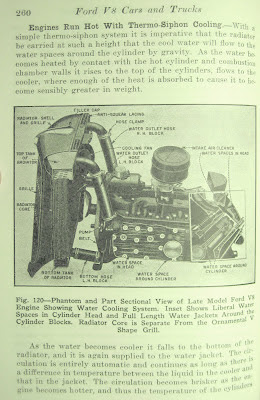 For those of you who are a fan of the flathead engine pictured above, here are a few pictures from my 1937 guide to Ford V8s. I would take this information with a grain of salt though. You’ll notice the coolant system description highlights the importance of the height of the radiator, indicating that this is used to assist the natural, buoyancy driven circulation system. Don’t count on it! 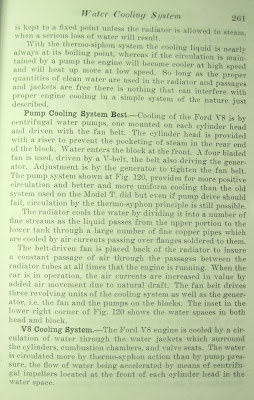 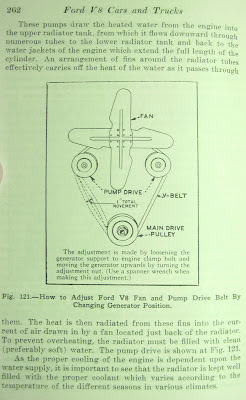 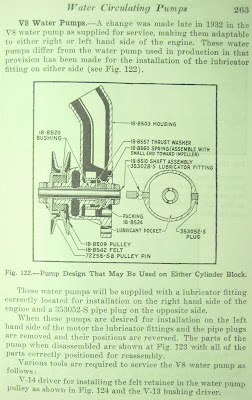 These engines have a reputation for overheating, partly because the water pumps on earlier models were not quite up to snuff, and partly because of the routing of the exhaust through the engine block. Frequently steam bubbles would develop in the water jacket, leading to overheating and cracking of the block, which would then allow exhaust gasses to blow into the water jacket, making the overheating worse. It’s really rather amazing the design lasted as long as it did.

Close
Improved manufacture techniques and the use of plastic tanks on radiators have pretty much eliminated this market. Now you just go to a shop where they automatically recommend new hoses, a new water pump, and a new radiator all while trying to sell you a coolant flush, fuel injector cleaner, and a new serpentine belt on every visit. 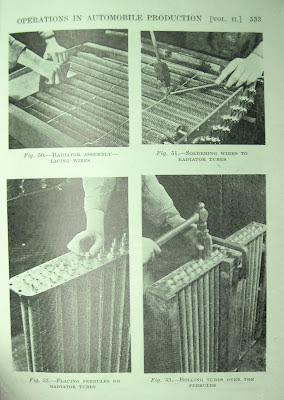 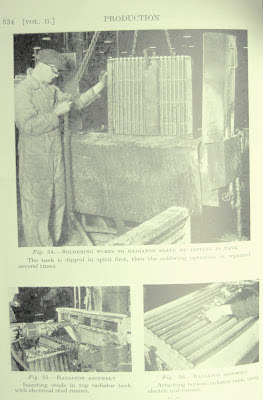 There's very little on a coolant system that you can't actually fix at home. A pressure tester is handy for diagnosing leaks as well as faulty radiator caps. A garden hose, some tubing, and a few clamps are sufficient to flush most coolant systems (a procedure which is rarely as necessary as the shops might tell you) and if you are having thermostat trouble, there's a very simple test for you to diagnose the problem. 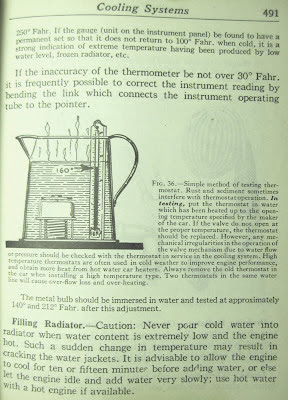 Of course any time automotive parts and kitchen wares cross paths, you may want to tactfully present the idea to other members of the household in case there are potential objections to the taste of ethylene glycol in the morning coffee!
at 11:49 AM 2 comments: