I'm bringing in the new year with some fireworks, but not the kind that you might be thinking.


When I was in Mt Pleasant this year I expected to see a night time steam traction show (where steam tractors are run at night so you can watch the sparks fly from the smokestack.) To make the show more interesting they throw sawdust into the firebox so that you get plenty of embers in the exhaust. 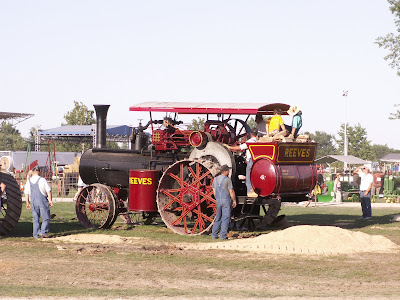 I knew I wouldn't be dissapointed when I spotted the sawdust next to this Reeves engine, so after dark that night True Blue Sam and I grabbed my tripod and camera and headed back to the fairgrounds. 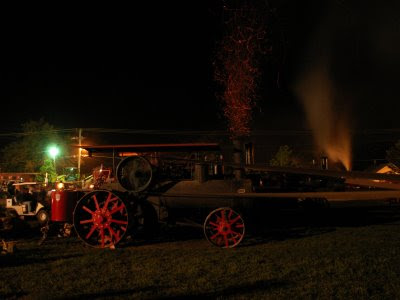 Four engines were puffing away gently, not causing much of a fuss. It was too dusty for me to use my flash without being blinded by the glare of the cloud settling over me, but a few time exposure shots caught the flashes from other cameras lighting up the Wood Brothers engine nicely. 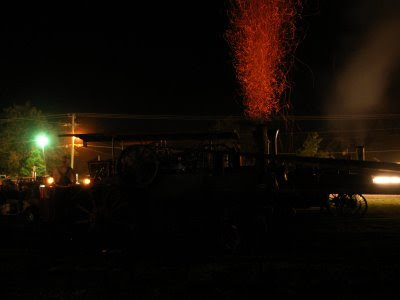 The engines puffed quietly on while their fireboxes were loaded up with wood and sawdust, throwing up only thin plumes of sparks. 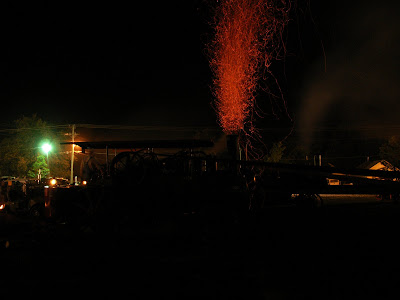 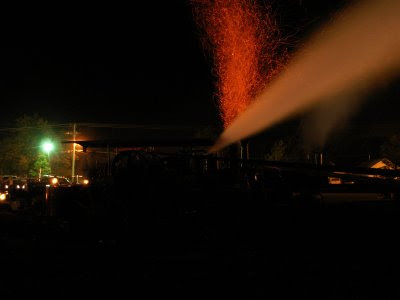 Then one of the steamers built up enough steam that the safety valved popped, sending a plume of steam forward over the top of the stack. As if on cue, all of the engines opened their throttles and the show began in earnest. 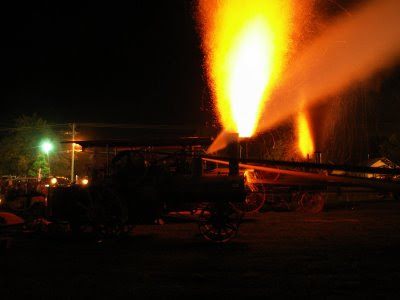 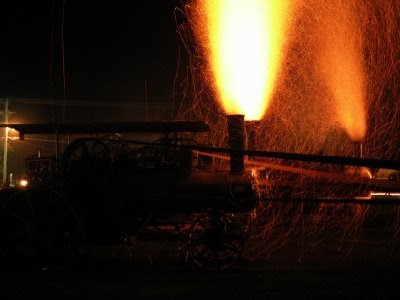 The towers of embers built and swirled and seemed to take on a life of their own. It was a sight that truly could not be forgotten! 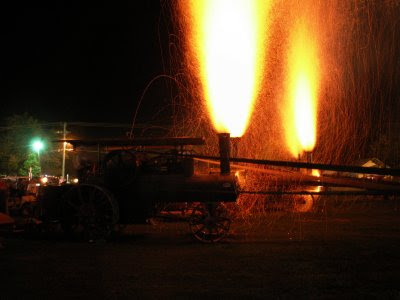 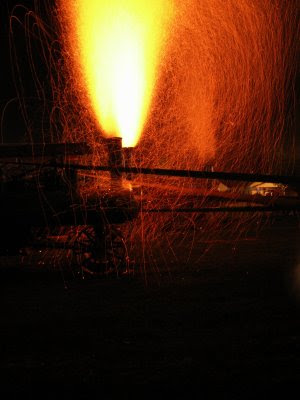 How do you add a little spark to your party?

Butane seems to do the trick. 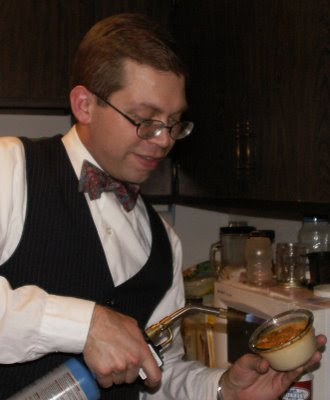 Now that my holiday party has been concluded, I'm off to Southern IL to spend some time with the family.

The beauty of an ugly machine I mentioned that the Tornado looked to me almost like a brand new model locomotive. It's not just because of the clean, fresh appearance, but also because of its general design, and to a great extent, the design of steam locomotives which was common in England. Great care was obviously taken in designing this Peppercorn class engine, and while its semi streamlined design is intentionally quite smooth and uninterrupted, the fact that it is practically devoid of visible piping and accouterments hanging on and around the boiler gives it deliberately tidy look which shouldn't be surprising for an English design.

For comparison, I would like to show you this locomotive. The Chicago and Illinois Eastern 1010.

This locomotive has the same basic wheel configuration. It was also intended for passenger service and it is similar in size, yet the two machines are worlds apart.

While one has its fixtures tucked under shrouds and concealed behind running gear, the other proudly flaunts its fittings, pipes and air tanks out in the open. One has a streamlined cab with polished brass window frames, the other has a square cab with a canvas sunshade hanging lazily over the engineer's window. The Tornado has graceful running boards which follow the line of the boiler and firebox, seeping back to a streamlined. The 1010 looks square and clunky by comparison.

Still, the fact that everything is visible is much more appealing to me. You can see all of the major external components of the locomotive, upgrades and modifications are usually quite obvious and sometimess tell a story about the locomotives history. One interesting item in this case is that the driving wheels do not all match. The middle driver is a boxpok wheel, short for box spoke. These wheels are made with wide, hollow spokes (hence the box label) which made the wheels lighter and easier to balance. I'm not certain whether or not this locomotive was built with this wheel, but it was not unusual for railways to upgrade their locomotives with these wheels when they were upgraded in the 30s and 40s. Rather than go to the expense of replacing all of the wheels, shops would replace only the drivers that had the most need for counterbalancing. It looked odd, and I'm sure no English engineer would want anything to do with such an 'unsightly' practice but it was a cost effective and common practice in the states.

Of course to be fair, the Tornado is a much more modern design. The Peppercorn class came about some 30 plus years after this locomotive was built in 1911. Had the 1010 been built later on it might have had a very different appearance. One of it's sister locomotives, number 1008, was built at the same time as the 1010, but was 'shrouded' in 1940 to pull the Dixie Flagler, a passenger train that ran from Chicago to Miami. 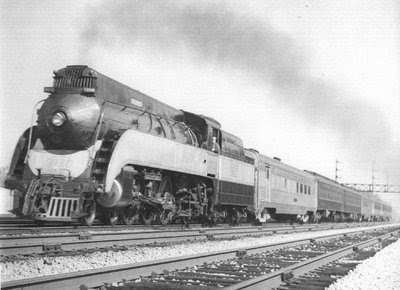 This picture of the 1008 is available from Yesteryear depot. The appearance is much like other locomotives streamlined in the 1930s and 40s. Shrouds were simply placed over the locomotives to give them a more streamlined look. It did give slightly cleaner lines, but didn't really give them the polished look of the Tornado, and locomotives like this were the exception in America, not the norm.

A lawyer with his briefcase can steal more than a hundred men with guns.

Of course, this quote would have NOTHING to do with this.
at 7:30 PM 1 comment: 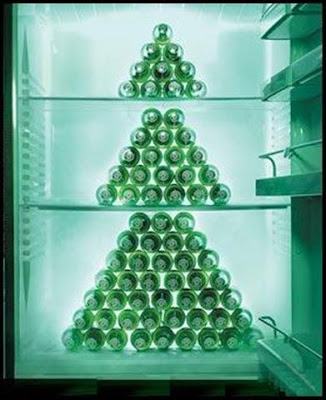 Hail to the Studebaker

This week my travels bring me to Canton Ohio home of the Pro Football Hall of Fame. I've been in this town many times and only stopped at the HoF once, and that was to get something from the gift shop.

If I have free time here, I'd much rather go to a much smaller, less known museum: the Canton Classic Car Museum. 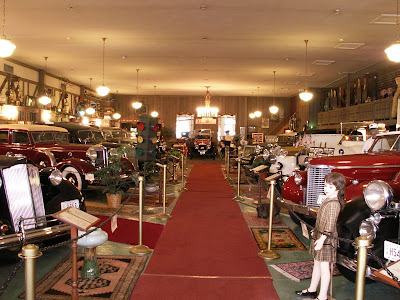 It's not a huge museum but it does have several very nice old cars, including most of the Marshall Belden collection. 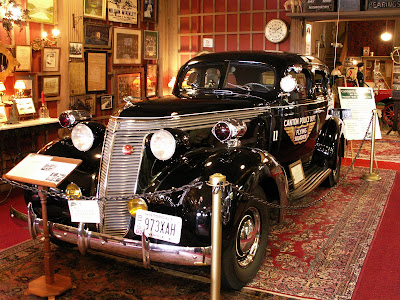 One of the jewels of their collection is the 1937 Studebaker President. Now Canton can be a rough town, and that's been true for quite a while. Back in the 1930s the Canton police bought a riot car, which was designed to be bulletproof (or at least strong enough to withstand a shot from a .45) This car was used for over 50 years without a breakdown. It spent most of it's time transporting money, but it was occasionally used in more hostile situations where the armor plating was necessary.

It's been restored recently, complete with the extra thick windows and machine gun ports! 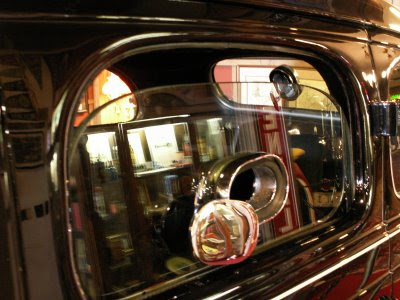 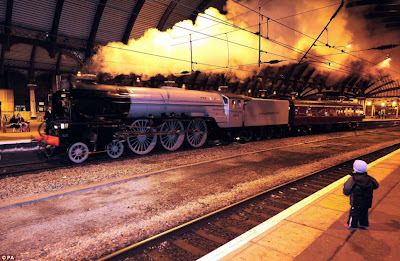 Recently I entertained some coworkers who were visiting from across the pond in England. They were here for long enough that there were some good opportunities for dining, target shooting, and touring. During the course of our conversations I picked up an interesting fact. There is actually a brand new steam locomotive in Britain which has recently been completed. When I say new, I don't mean, completely rebuilt, I mean built from the ground up. The new locomotive was based upon existing plans, and locating these must have been an adventure in and of itself. 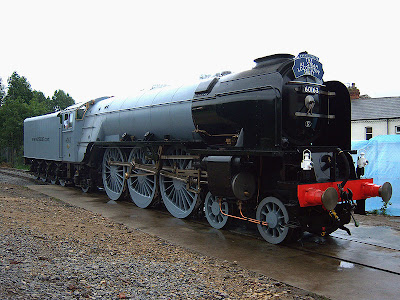 The end result is beautiful. When I first saw the pictures I could barely believe that it was real. The glossy paint and bright colors made it look more like a brand new model than the real thing. But it is indeed real, and it has recently completed testing so that it can be used on major railways in Britain. I hope that future generations get as much enjoyment from this locomotive as I have from the many antique steamers I have seen.

For more information check out these links.