It needed to be said

This isn't the sort of thing that you really want to hear, or even say right before Christmas. I just think it needed to be said, because the people who should be making such statements are not willing to do so.

Last Friday I watched the news as reports poured in about the tragedy at Sandy Hook. The initial reports were muddled, confused, and would mostly be rewritten in the following days. There were two things, however, that became very clear; Something truly horrid had occurred at an elementary school in CT and it was going to be a political football used to create a new assault weapons ban.

The families of the victims deserve better than that. In fact all of the people who's lives have been impacted by media and politically exploited crimes deserve better.

Look at these faces. 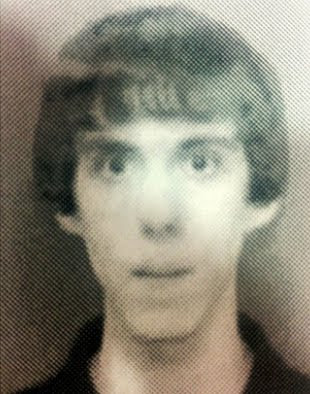 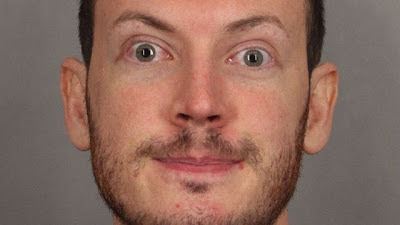 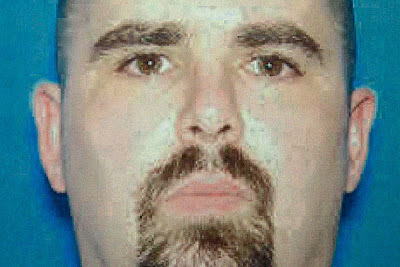 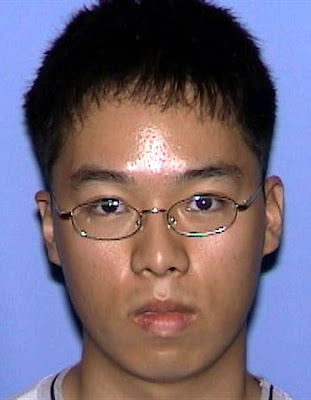 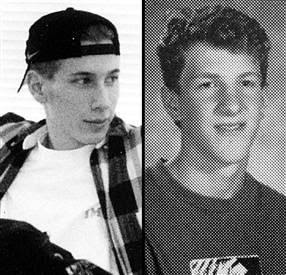 These are men who killed innocent people. Not one of these men was forced to pick up a gun and shoot people. They CHOSE to commit atrocities. Regardless of how they came to be this way, they are evil. They are not the only ones.

You can try to make people feel safer by outlawing black rifles. Evil people will still exist. They will use any means available to bring harm to others. The modern world is full of tools that can be used for constructive or destructive purposes. Cars can become weapons, gas can become Molotov cocktails, fertilizer can become explosives, and planes can become guided missiles. You can't get rid of technology, and all the laws in the world won't stop determined people from using it.

What you can do is accept that there are bad people in the world, prepare yourself as best you can to deal with whatever evil confronts you, and because you can never be prepared for every possibility, learn to cherish each day you have and the good people that you share it with.
at 1:32 PM 7 comments:

As members of blogosphere go I'm not exactly your model citizen. I'm probably the real world equivalent of the guy who lives in the old house down the block with the 'no soliciting' and 'no trespassing' and 'beware of owner' signs. People who've met him might say he's nice, but aside from the mysterious black truck parked there once in a while, there's no evidence he even exists. I suppose that's what I get for trying to do so many things in the other parts of my life, I just don't get around to posting very often.

Case in point. I've have a bunch of pictures from the Gun Blogger Rendezvous that I haven't even begun to post yet. I should have posted them some time ago, but I've only recently started going through them again to figure out what to say.

Today I was flipping through them and stopped on this shot of Daily Pundit showing off his California compatible SU16-CA and it occurred to me how much firearms have changed over the past 150 years. 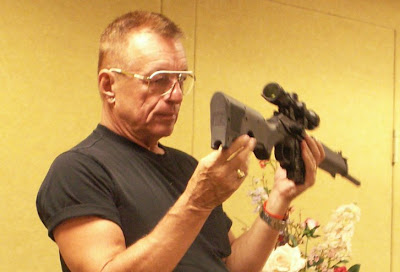 The last one hundred years have mostly been about development of semi-automatic rifles which, for most situations, have brought us to the practical limit of rate of fire for an weapon carried and handled by an individual. That race for more firepower really kicked off around 1918 when the Pedersen device made it possible to give soldier's a rapid firing magazine fed rifle at a time when many leaders had yet to figure out the futility of using bayonets for large scale assaults. It was a makeshift weapon and never proved itself in battle, but it pointed the way for weapons development. 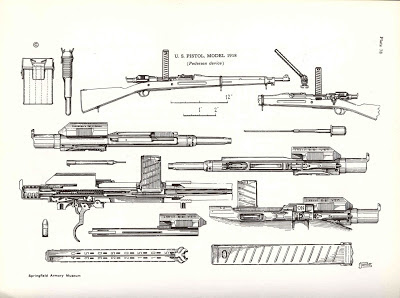 Looking further back there are a plethora of different designs which, if viewed all together might make you wonder about the sanity of the inventors, but there is a fascinating if not all together logical progression to the development between the 1860s and 1910. Take for instance this display I saw on one of my visits to the UK. It was in the "King's Own Border Regiment" museum which is on the grounds of Carlisle Castle. 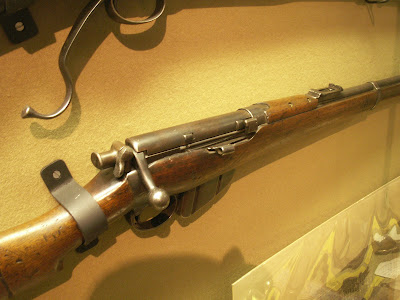 This Lee Metford rifle contains most of the components of a modern bolt action rifle and it made a significant advance for a battle rifle by using a detachable box magazine, something which would set the stage for semi-auto and full auto battle rifles. It was first adopted for service in 1888. 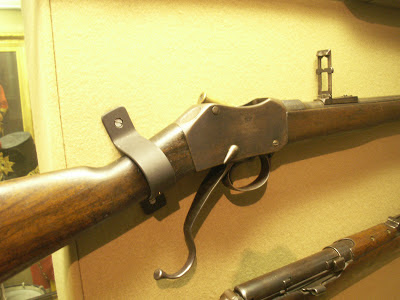 Going back a bit further you saw the the Martini Henry rifle which began its service with the Brits in the 1870s. It's a single shot, falling block action which, despite some early design problems, was both sturdy and reliable. What's interesting about this rifle is that it was actually a big technological leap from many of it's predecessors because the lock mechanism and breech were integrated into a receiver. That may not seem like much, but virtually all of the military arms up until this time were designed in the traditional "lock, stock, and barrel" style where the three major components of a rifle were mostly independent of one another. Making a military rifle without a separate lock was a pretty radical change and was not likely to be easy on the armorers. 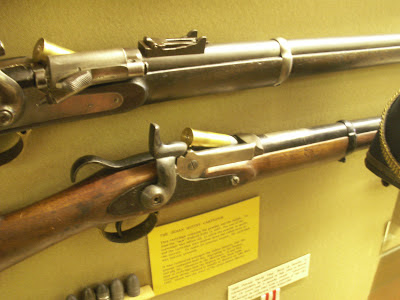 If you went back just a few years further, you would find this Peabody conversion rifle (I might be confusing this with a Roberts, but I think I have it right) which also had a falling block style action, but was based upon (and in fact made from) older muskets with a separate lock mechanism. The lock mechanism (mounted on a plate and fastened by two screws) was virtually identical to the locks dating back to flintlocks. The rifle itself was put together much the same as previous models with the exception that the barrel had a breech locking mechanism on it. There's a good reason for this type of similarity. Many of the early breech loaders were converted from muzzle loaders. Typically the rear of the barrel would be milled open at the rear and then fitted with a breech block of some sort and a firing pin or percussion nipple that was struck by the hammer. The lock and trigger didn't actually require modification to make this change. 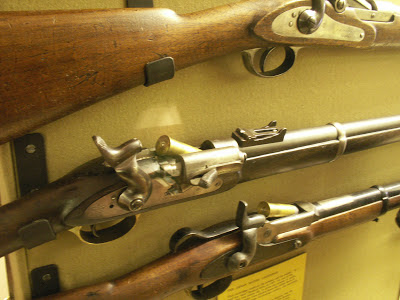 A similar example would be the Snider conversion, which was a standard rifle in England for many years. It too used an older style lock mechanism and a barrel modified with a breech block that pivoted out to one side. The pivoting breech block would not have been as strong as a falling block action (meaning chamber pressures were low by today's standards) but it required very little modification to the stock and so it was a cost effective way to use the crates full of muzzle loaders found in most military arsenals.

Of course, if you start digging into transition rifles of this type you'll probably find a dizzying array of designs. So far I haven't even been able to identify this one, but from the looks of it, it's a 'trap door' style percussion design with a large locking lever over the top. 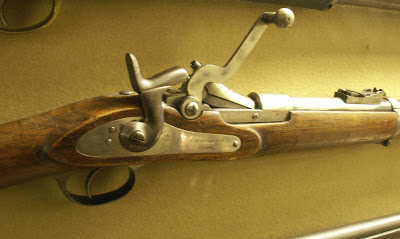 (Apparently rifles of this vintage are naturally blurry; no blame can be laid upon the cameraman)

The US went through it's own transitional phase, though at a slightly different pace. At the end of the Civil War it was obvious to many military minds that muzzle loading rifles were a thing of the past, but there were large stockpiles of them left over from the war. In 1865 the first model Allin converted rifle (named for it's creator) was established. It was quickly followed by an 1866 model when the original design was found to be somewhat lacking. The conversion essentially consisted of milling open the back of the barrel and pinning in a breech block. But unlike the Snider conversion used by England, the hinge pin was at the front of the breech block so the block flipped forward rather than to the side. These conversions were used for a few years and the design was well enough accepted that in 1873 a new model trap-door rifle was released.

This is the model 1873 Springfield trapdoor. It was designed in the same style as the earlier Allin conversions but chambered in .45-70 rather than slightly larger .50-70. A few variants of this model exist, the most valuable of which would be the cavalry trapdoor, due largely to it's association with Custer's final adventure.

This basic design and the .45-70 cartridge were used by the US army right up until the 30-40 Krag became standard in the 1890s. That means the trapdoor design lies astraddle the transition from black powder to smokeless powder. That creates some problems! 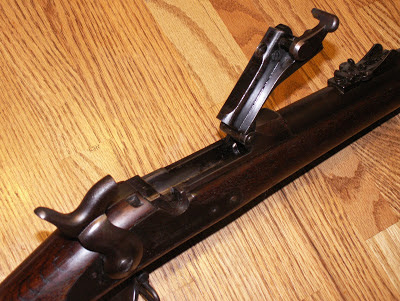 The 45-70, being developed for black powder, could pretty much be loaded by scooping the cartridge full of black powder and stuffing a bullet on top. There was simply not enough room to get more black powder into the cartridge, so the design was self limiting as far as pressure was concerned. The trapdoor style design was built to handle these pressures and no further thought was given to the matter. That is, until smokeless powders became commonly available. Most of these powders can pack more energy into a smaller space and consequently it was possible to generate much higher pressures and velocities from 45-70 ammunition. The capacity of the trap-door design was never built with this in mind.

I've heard people say that the 1873 design is capable of handling about 28,000 PSI or 25,000 CUP. A look at the Lee manual shows most of their "never exceed" loads are 15,000 or 16,000 PSI, which sounds safer to me considering these firearms are now antiques. However with most smokeless powders you can create much higher pressures in the roomy 45-70 envelope. In fact load tables for the Ruger single shot designs list loads up to 50,000 PSI. Naturally people with more modern firearm designs created hot loads to get more power and distance and the unintended consequence was that plenty of ammunition is available which the old fashioned Springfields are not able to handle. 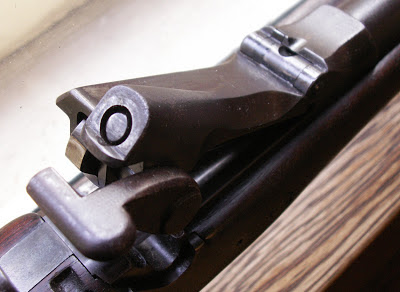 Anyone that owns one of these should be very discriminating about the ammunition they use. Most commercial ammunition will be clearly marked if it is too hot for a trap-door design, but you should still investigate find out the chamber pressures you're dealing with.

Even when loading to proper levels, these firearms should be handled with significant care and attention. This one has a cartouch mark that says 1882, which makes it 130 years old, and even though the bore is good, that's no guarantee that it's still safe. It's best to have a gunsmith check your rifle over, looking for wear and cracks around the hinge pin, latch pin, and hinge lugs to make sure nothing is about to fly apart. It's also a good idea to check the headspace (an easy matter since the cartridge headspaces on the rim) just to make sure you don't give the cartridge too much room to bounce around. 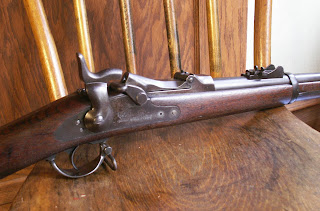 Now that I've scared you enough you can relax a little. These rifles are still readily available at most gun shows and often at reasonable prices. Huge numbers of these rifles were surplussed out in the early 1900s and they were a favorite for hunters. Sadly many of them were 'sporterized' by cutting down the stock, changing sights and re-blueing, but they are still lovely relics from a time when firearms technology was making it's first steps towards the modern rifle.
at 9:03 PM 24 comments: