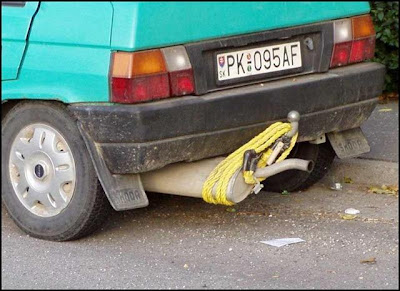 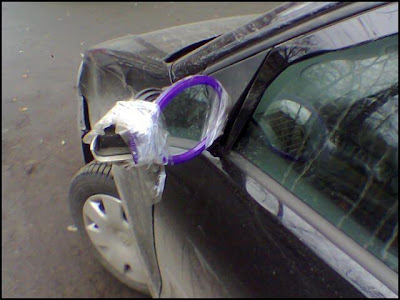 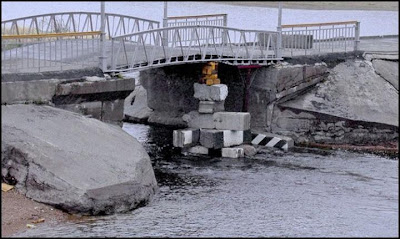 I know that necessity is the mother of invention, but these must be the red-headed step children.
at 7:20 PM No comments:

Once again, I'm back. Since my last significant post I've spent about 2 weeks in South Africa and some time in Ohio, but I'm back at home for about a week!

I'll be putting up a few posts soon, Starting with a brief essay I've been contemplating for a few months: The Mundane Detail
at 10:20 PM No comments:

If you’ve seen the movie ‘Office space’ then you probably remember the scene when the three main characters discuss how their money skimming scheme has gone awry and discover they will probably be going to prison. Michael, reveals what has given them away…

It’s the sort of thing that I have encountered too often. People don’t place value on things that seem simple or ordinary, but these are the things that often end up being important.

Shortly after I began my job, I was given a bit of advice. I was told that in spite of all the calculus and differential equations I had been taught in school, that the most important math skills to have were basic counting skills. Why? Because no matter how well you design parts, if you don’t order enough of them you’ll be throwing your work away. I realized this style of thought applied to many other things as well.

Here are a few examples.

It’s common for engineers to design a just few parts of a much larger system, in fact it is typically necessary because few people have the knowledge necessary to design an entire machine from the foundation up. One of the many problems arising from this is that incompatibilities may arise in a design. It’s worse yet if the parts cannot be tested, except at considerable expense.

In my first case, the parts being designed had to be taken overseas for testing. When they arrived, it was found that they were missing a feature that they required. It was a simple feature; three lines and a little text on the drawing would have solved the problem. But the parts had already been made when this was discovered. Even worse, tickets had been purchased, promises had been made to customers, and machines had been shut down in preparation for the testing. Three lines could have cost quite a lot of money if it hadn’t been for a stroke of luck in having a good machine shop nearby.

The second situation isn’t quite so nice. It involves a million dollar piece of equipment to be used as part of a much larger machine. It takes considerable work to properly install one of these, and there are plenty of other parts that are needed to complete the job. By comparison, these parts are inexpensive. A few hundred dollars worth of parts seems inconsequential compared with the overall price of the unit. If only that were true!

An error resulted in a few hundred dollars worth of parts not being shipped. Those parts weren’t available elsewhere, so when the shipment showed up without them it was a problem. There was no time to get more parts shipped, there was no local supplier, and no simple way to fix the problem. The only way to get around not having the right parts was to spend two days cutting holes in this million dollar piece of equipment while it was on the floor of a machine shop that is better suited to much less precise work. And that’s after waiting a day and a half for instructions from the engineering department, that had to be disregarded in the end because they were apparently not able to fully evaluate the situation from overseas.

The end result was a high potential for a botched installation, two or more days wasted production, and at least a man-week of time and labor thrown away. That’s worth quite a bit more than a few hundred dollars. And of course, whoever packed the boxes for the shipment, probably had no idea of the importance of those parts and the consequences of losing them. If every shipment was like that, he could go on shipping 99% of the parts that were ordered, and still leave all of his customers with a very low rate of satisfaction.

Mundane details like this are like quicksand, you’ll never know there’s a problem until you’ve stepped in it and start sinking. It’s an overlooked detail that partially responsible for my extended stay in . For what it’s worth, I was not the one who overlooked it, but that’s little consolation since things that aren’t my fault are often my problem.

Of course when forgotten details multiply, then things begin to look less like quicksand and more like a whirlpool. On a recent trial I had to rely upon four suppliers for parts and raw materials. The supplier I dealt with the most received a design which I had carefully checked, and I had multiple conversations to confirm the delivery date and address to insure that everything went smoothly. After all of that, things did indeed go smoothly, but not with the other suppliers.

One supplier made a part with a significant manufacturing error. Either through haste or misinterpretation of a drawing, the part was unsuitable for use without significant modification. (Modification that involved hand shaping metal that is supposed to be made to aerospace like tolerances. Talk about risky business!) That problem was solved, but there’s more.

The third supplier does much of their design work in house, and seldom provides details for fear of losing designs to other shops and therefore losing business. Because of this, it isn’t clear if the design was incorrect or if the manufacturing was simply sloppy with no inspection process. Either way, the equipment had to be jerry rigged to make it work, and as soon as the trial work was done it was boxed back up and sent back for rework. We lost time and the supplier will have to bear unnecessary expenses to correct the error. Still, the trial was still possible, or at least it was until the last supplier put the last nail in the coffin.

It turns out that some material shipped was unsuitable for the trial. Observations in the field indicated that it was probably not what had been promised prior to shipment, and might not have even been what its label said. We scrambled to do a few tests with other material, and we were able to confirm that everything else was working fine, but without large quantities of the requested material, the trial was essentially dead in the water.

All of the errors were simple ones that could have been avoided by a careful look at the parts that had been made or a little extra care in the manufacturing process.

Had I not been through trials like this before I think I would have been completely frustrated with the entire situation. Having a trial thwarted is bad, but having to solve all of the other problems first really adds salt to the wound. Still, there’s nothing to do but make sure everything is corrected then remember what went wrong so you can plan to avoid the problems in the future.

If there’s a lesson to be learned from this, I suppose it is that details can be simple, and even boring, and yet still be insanely important to your work or others, so try to stay sharp, and don’t overlook the little stuff.

An afterthought: I am not immune to this problem myself. I would like to comfort myself with the thought that the details I miss are more subtle than the examples listed here, but the truth is that nobody is perfect. Of course that doesn’t mean we can’t strive for perfection.