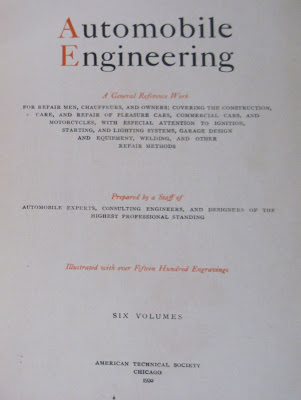 This is the first of many such posts in which I hope to bring you interesting tidbits from old automotive texts. 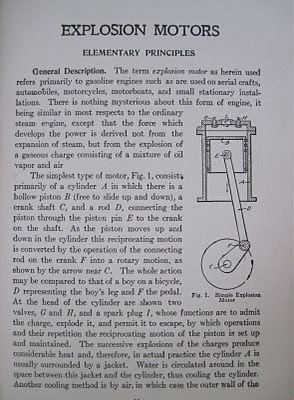 It sounds more exciting than saying "Internal Combustion" but that's really what this is talking about. The name died out early in the automotive industry, no doubt to the dismay of steam car builders. 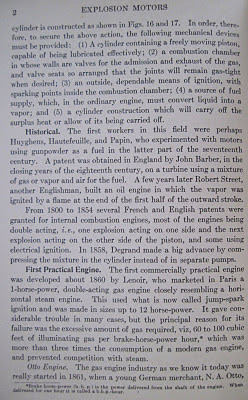 When the American Technical society published their automobile engineering reference in 1920 internal combustion was not particularly new, but the world was still not far removed from the early engines of the 1860s. This is highlighted nicely by the two page explanation of the combustion engine's evolution.

Among the more notable features of this history is the connection between steam engines and 'explosion' engine design. The Lenoir engine mentioned here not only looks considerably like a steam engine, but shares some very functional elements. 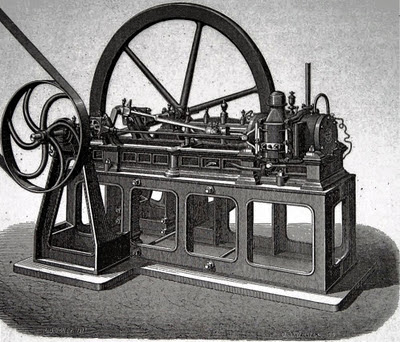 Note: not from this manual

Unlike most internal combustion engines, this is a double acting design, meaning that the cylinder is pressurized in both directions (at alternating times of course.) What's more, this is a non compression engine, meaning that that rather than having a combustible mixture drawn into the cylinder, compressed and then ignited, the Lenoir engine simply drew fuel and air into the cylinder, ignited them and allowed them to expand all in one stroke. This action has much more in common with the steam engine than it does with modern combustion applications, and it was short lived in commercial use because of its inefficiency 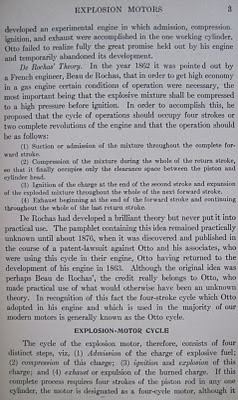 Moving on to more modern engines, the text explains the 4 stroke engine cycle first put forward by De Rochas and made practical by Otto. 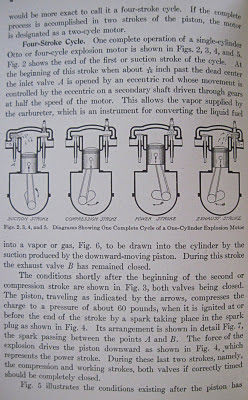 I've seen this illustration in several texts and what I find interesting about it is that it's done using a T head engine, which was rarely seen in use after WWI. It make a very clear illustration of the four stroke cycle, but drawbacks in operation. Mainly, it requires two sets of camshafts and timing chains/gears and it requires a large headspace meaning the compression ratio of the engine will be reduced leading to lower horsepower output. The only real advantage of this design is that it's crossflow layout allows the intake side to be kept cool (typically by a waterjacket) so that the fuel and air drawn into the cylinder are less likely to reach a temperature/pressure ratio that causes early combustion (knocking.) The appearance of leaded gasoline solved most knocking problems and effectively killed this design in favor of L head (flathead) and overhead valve designs. 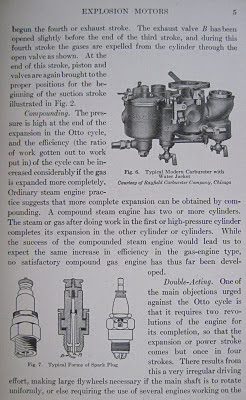 This section goes on to briefly discuss the concepts of compound gas engines, using the expansion of hot gases and un-burnt fuel for a second, usually larger piston, and double acting gas engines, which essentially require a double ended cylinder.

Both concepts have some theoretical merit but have since been deemed impractical for automotive use due to complexity or unsuitable functionality.

These books are full of interesting plates and lessons, so I'll be posting more excerpts this time next week.
at 10:01 AM 2 comments:

I smell a series!

Back around labor day I was at the Old Threshers Reunion. Now normally it's a family outing, but this year we couldn't have the normal get together so I just wandered around the grounds a bit checking out the old iron and the flea market. One of the junk dealers perveyors of fine mechanical merchandise had a stack of old textbooks that caught my eye.

He had a six volume set of automotive engineering texts from 1920! After a little negotiating I packed these back to the car and I've been sifting through them ever since. They're too much fun not to share, so I'm taking snapshots of the material so I can put some up from time to time.

This Wed I think "Explosion Motors" will be a good place to start!
at 10:01 AM 3 comments: